Was this page helpful?

Tracing is a powerful tool when it comes to analysis and debugging of applications. Unfortunately, most tracing tools that are readily available are designed specifically for analyzing processes, threads and system calls. Specialized tools are required to enable analysis that is tailored to an alternative model of computation such as Reactors. The tools should be capable of understanding the fundamental concepts of the model, such as the distinction between logical and physical time, as well as structural units such as reactors and reactions. This page gives an overview of the currently supported trace mechanism, as well as an outline of alternative tools that could be useful in the future.

Tracing is different from logging. Logging produces human-readable output in textual form and incurs significant overhead. Tracing produces binary data that must be further processed to be useful and is designed to have minimal impact on the execution time of a program.

Tracing in the Cpp target of Lingua Franca is based on three third-party tools. LTTng is a Linux tool used to instrument the Lingua Franca program and to record traces in the CTF, which minimizes the overhead of instrumentation. Chrome (or Chromium) has a build in trace viewer that is used to visualize the recorded trace data in a reactor-specific way. Since the Chrome trace-viewer cannot read CTF traces directly, we use Babeltrace2 to convert the recorded CTF trace to a json file that the Google trace viewer can load.

Some helper scripts that we will use below, can be found in the reactor-cpp repository. 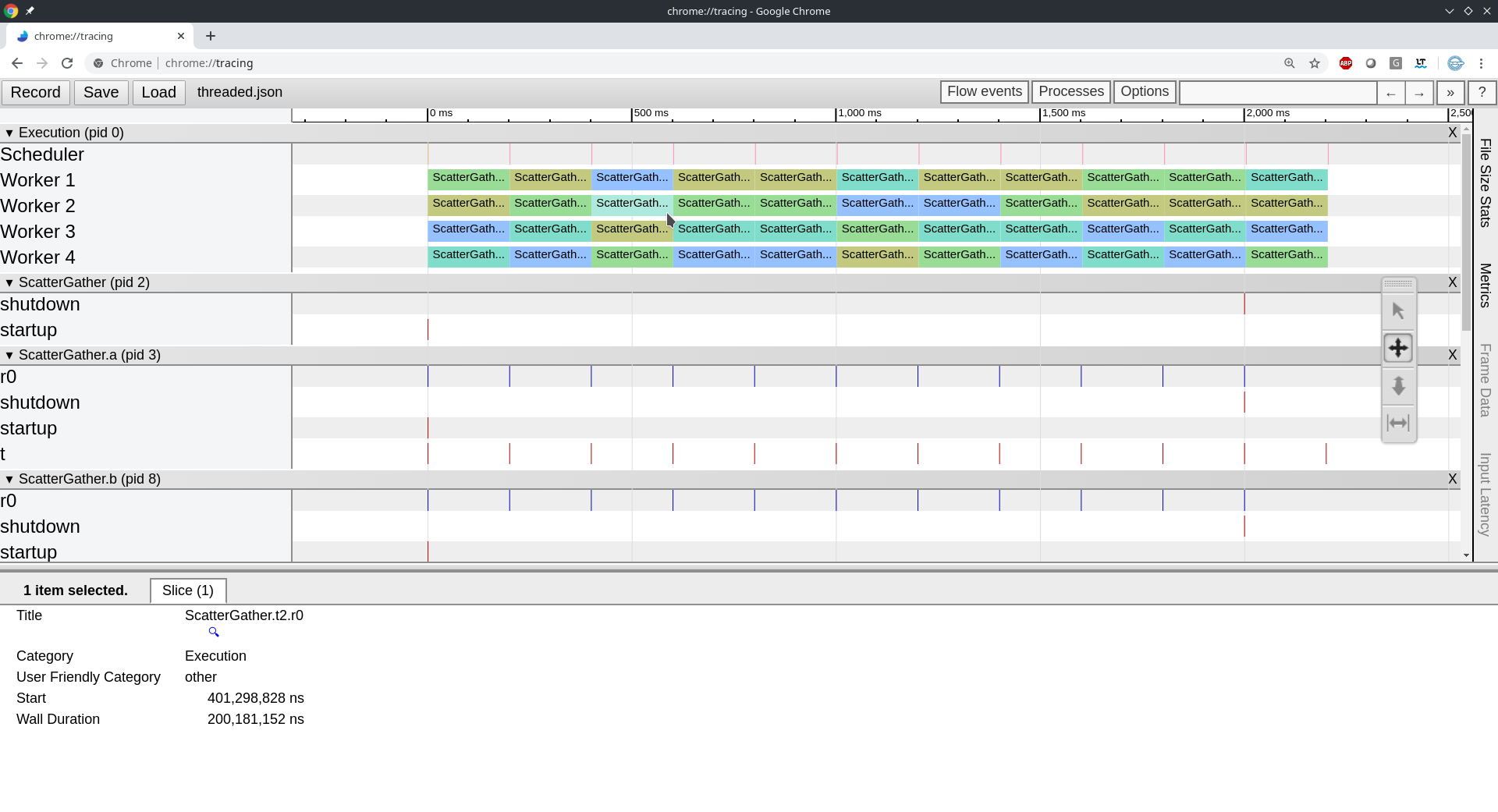 The trace visualization consists of two parts. The upper part (labeled Execution), shows the physical time at which reactions are executed by the scheduler or by its worker threads. The lower parts show the reactors of the program. For each reactor, all scheduled actions (red markers) and all triggered reactions (blue markers) are visualized by their logical time. All elements in the trace view can be clicked on to display more detailed information.

Supporting Tracing in Other Targets

The same mechanism as described above can be used to trace Lingua Franca applications in other target languages. The key is to instrument the target runtime in order to produce CTF traces. LTTng comes with support for multiple languages. As a fallback solution, C can be used to define the trace points which then can be used from the target language through a foreign function interface. It should also be considered, to use an alternative library in the target language that is capable of producing CTF traces. The only requirement is that the generated CTF events have a similar structure, as it is currently used in the C++ target. See trace.hh in reactor-cpp to get an overview of the available trace points.

This section gives a brief overview of trace viewers that could be applicable for tracing Lingua Franca applications.

The Google Trace Viewer is the only viewer currently supported. Since it reads json files, it is easy to use and a conversion script can easily tailor the trace data such that it is correctly displayed by the viewer. Documentation of the json trace format can be found here. There is also a list of available color codes. The approach of using LTTng for tracing, a converter and Google Trace Viewer can also be used to sample and visualize data live. This is shown in the Scalapus project.

Trace Compass is based on Eclipse and has native support for CTF traces. Due to the Eclipse support, Trace Compass is a natural candidate for integration with the Lingua Franca IDE. However, Trace Compass is tailored for the visualization of kernel traces or running user processes. Out of the box, it cannot make sense of reactor traces. There are various ways to customize Trace Compass in order to properly display the data, but they are difficult to use and/or not well documented.

Vampir is another powerful tracing tool that is mainly developed at TU Dresden. It targets mostly HPC applications, and I am not sure if it can be adjusted to display specific information other than details of processes and threads.

Tracing in C and Python

The C and Python tracing mechanism depends only on the availability of the pthread library. Like C++ tracing, tracing is enabled by a target parameter:

Once it is enabled, when the compiled program, say Foo.lf, is executed, a trace file is created, Foo.lft (the extension is for “Lingua Franca trace”). If you wish to customize the root name of the trace file, you can specify the following target property instead:

This will result in the trace file being named Bar.lft, regardless of the name of the .lf file.

The trace file is a binary file. It is not human readable. There are two utilities for reading it:

These two programs are located in lingua_franca/util/tracing. Running make install in that directory will put executables into lingua_franca/bin, the same directory that houses lfc, the compiler.

Consider for example the ThreadedThreaded.lf test, which executes a number of heavyweight computations in parallel on multiple cores. If you enable tracing as shown above and run the program, a ThreadedTheread.lft file will appear. Running

will create a file called ThreadedThreaded.csv that looks like this:

The first line defines each of the columns. For example, the second line records a call to lf_schedule() for reactor named a, with no associated reaction, in worker thread 0, at (elapsed) logical time 0 with microstep 0. The call occurred at (elapsed) physical time 704 microseconds and is scheduling the trigger named a.t (a timer) with extra delay 0. This file can be imported into any spreadsheet program and sorted and analyzed.

The trace_to_csv utility will also create a summary file called ThreadedThreaded_summary.csv that looks like this after importing in Excel: 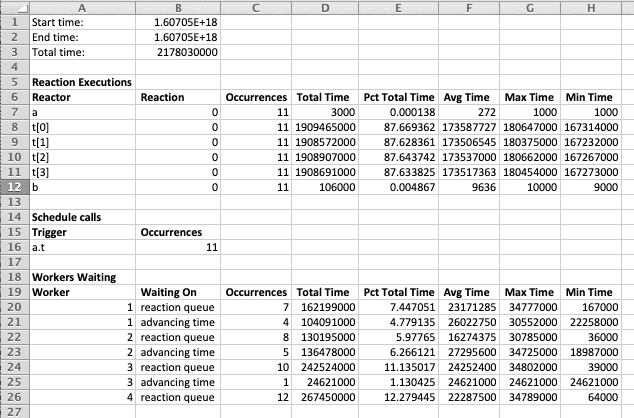 then a ThreadedThreaded.json file is created. To visualize the data, point your Chrome browser to chrome://tracing/. Click on the Load button and select the .json file that you just created. The result should look something like this: 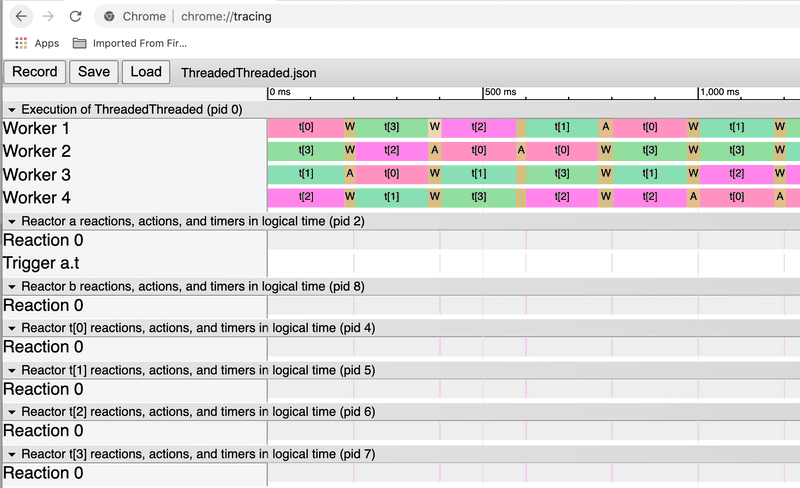 The tan-colored regions whose labels start with “A” and “W” represent time spent advancing logical time and waiting for activity on the reaction queue, respectively. When logical time advances, unless you have specified the -fast option, one of the worker threads blocks execution until physical time catches up with logical time. The remaining worker threads block waiting for reactions that are ready to execute appear on the reaction queue.

The json trace format can be found here. There is also a list of available color codes.

Users can add their own tracepoints in order to provide low-overhead recording of events and events with values that occur during the execution of reactions. To do this, the first step is to register the trace event in a startup reaction as follows:

The description of the event is an arbitrary string, but the string must be unique. All events with the same description will be collected together in any display of events.

To then actually record an event, in a reaction, call tracepoint_user_event, passing it the same string. E.g.,

You can also pass a value to the trace. The type of the value is long long, so it can be a time value or an int. For example,

An example of a Chrome display of a run of the Tracing regression test is here:

In this image, “Number of Destination invocations” is an event description to which values 1 through 10 were passed. This results in the shaded value plot shown first. The other four rows are just pure events (with no value). They are shown by (extremely) thin lines positioned at the physical time of the occurrence of the event. Dragging the mouse over those thin lines shows further details about the event in the window below.

The target declaration and its parameters in Lingua Franca.

Lingua Franca is an open source project. Help us improve these pages by sending a Pull Request ❤

Contributors to this page:
SB